During your stay at the Hotel Settimo Cielo we can arrange a fantastic range of excursions to help you take full advantage of the area. 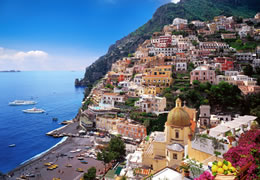 One of Italy's most well known and picturesque tourist towns, Positano is also famous for its highly original fashion clothing in distinctive fabrics sold in many of the charming boutiques. You need to visit the little town on foot to appreciate its pretty narrow streets, pastel-coloured houses and endless steps carved out of the rock. 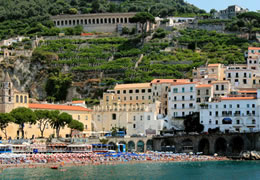 Take state road 163, which twists and turns along the full length of the Amalfi Coast offering stunning views at every corner. Visitors of all kinds are drawn to the steep stepped Positano, a beautiful 'Hamlet' clinging to tall cliffs. In 1953 John Steinbeck wrote that Positano "bites deep. It is a dream place that isn't quite real when you are there and becomes beckoningly real after you have gone."
Further along the road you will reach Amalfi with it's glorious past as a maritime republic. In the 11th Century Amalfi was a rival to the ports of Venice and Genoa. A visit to the Cathedral of St Andrew the Apostle is a must.
A stone's throw from Amalfi you will stumble upon Ravello whose history is entwined with that of Amalfi. Ravello is a place of serene beauty, chosen by Wagner as "the magic garden of Klingsor", the setting for his opera Parsifal.
Don't forget to look out for the limestone islands called Li Galli, southwest of Positano. Traditionally they are the home of the Sirens made famous by Homer in his accounts of the trials of Odysseus. 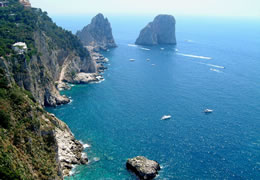 Described as the island of dreams, the isle of Capri has captivated two Roman emperors, Augustus and Tiberious. Discover the rugged coastline, pierced with caves and peaceful creaks, fringed with fantastic reefs and sheer cliffs dipping vertically into the sea. 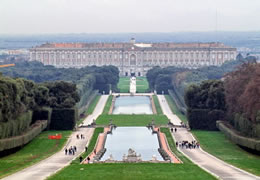 The Royal Palace of Caserta was built to rival the Palace of Versailles in 1774. The Royal apartments are richly decorated with gold, stucco and marble and contain empire state furnishings.
The majestic outline of the Abbey of Monte Cassino can be seen from miles away. In its history the abbey has been destroyed four times and each time rebuilt. It was last destroyed in 1944 during the allied landings in WWII. Once again it was reconstructed and reopened in 1953.
The British war cemetery can be found down in the town of Cassino. 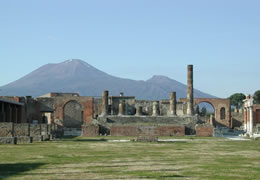 An earthquake in AD62, which shook Pompeii and damaged many of it's buildings, was merely a prelude to the tragic day in AD79, when Vesuvious erupted engulfing the city and its inhabitants with a terrible storm of cinders and ash. Today Pompeii looks as though a spell has been cast to enable us to see Roman life frozen on time. This vast archaeological site is a must for visitors to the area. 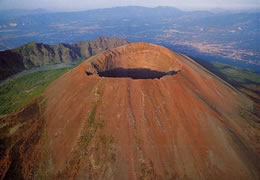 Every room in the hotel offers a fantastic view of the Vesuvio, but what about taking in the view from the top? The last eruption was back in 1944 and he's been sleeping ever since. Take the opportunity to peek into the huge crater and enjoy the panoramic views from the top. 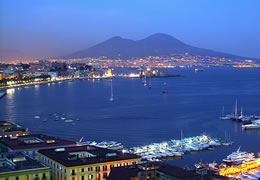 You can arrive in Napoli by train, bus or boat in as little as an hour. Napoli is home to The National Museum of Archaeology where you will find the best examples treasured artefacts from the ruins of Pompeii and Herculaneum. You could also visit the Teatro San Carlo, the favourite opera house of Pavarotti and many other attractions. Its fine palaces, churches and lively city centre with its excellent shops make Napoli an ongoing attraction. 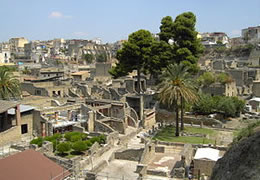 In 89BC the town became part of the Roman Empire, a residential municipium and resort. The town's quiet existence was brought to an abrupt end in AD79, when the eruption of Vesuvious that buried Pompeii covered Herculaneum with a deep layer of lava & mud. 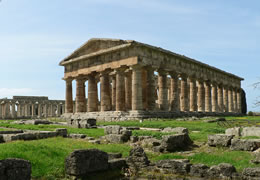 The ancient city of Paestum was founded by the Greeks in BC 600 & fell to the Romans in BC 273. The surviving Doric temples are surrounded by rural countryside. Inside the museum you'll find sculptures, painted pots, terracottas and very early tomb paintings.
Paestum is also the home of Buffalo Mozzarella, the delicious local cheese. 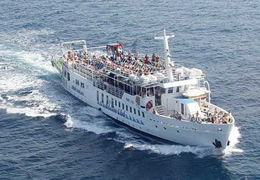 A great opportunity to spend a relaxing day out enjoying the spectacular scenery of the Amalfi Coast and the island of Capri. During the cruise, on board a comfortable yacht equipped with sun terrace, showers, deckchairs and restaurant, you will have the chance to stop at Capri for a swim in the island's impossibly azure sea and visit two of the most picturesque towns on the coast, Amalfi and Positano. 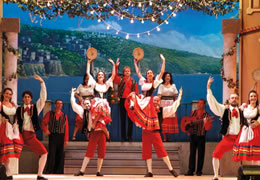 The fabulous Neapolitan Show An incredible journey through the ages from 1558 until today. The performance revolves around the most important stories of Sorrento and the Kingdom of Naples in the Iast 500 years.